Melina Kanakaredes will not return to "CSI: New York" this fall. Kanakaredes, who played Detective Stella Bonasera for six seasons on the procedural, chose not to return, CBS says. 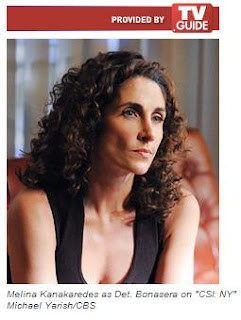 "We hoped Melina would return to 'CSI: NY' for another season, but we respect her decision to move on," the network said in a statement. "Her amazing talent and invaluable contribution to the success of the series are greatly appreciated and will not be forgotten." Kanakaredes gave no further explanation in her statement. "I made some amazing and lifelong friendships during my six seasons on 'CSI: NY,' and I will treasure them forever!" she said. CBS declined to comment on whether Kanakaredes would appear in Season 7 to give closure to her character or if a new female lead was being considered to star opposite Gary Sinise. (Sela Ward is reportedly being considered, according to Deadline.com.) Kanakaredes' exit follows those of "CSI's" Liz Vassey and "CSI: Miami's" Eddie Cibrian, each of whom failed to renew their contracts. CBS also cut "Criminal Minds'" A.J. Cook loose last month, though she will appear in two episodes to end her character's story. "CSI:NY" will air on Fridays at 9pm ET this fall. siapa la agaknya yang bakal ganti tempat Stella ni kan nanti.. moga-moga cerita ni best dia dengan pelakon baru sama taraf la nanti dengan CSI yang ade Detective Stella.
sumber dari Yahoo
saya si ietams

Email ThisBlogThis!Share to TwitterShare to FacebookShare to Pinterest
Labels: astro